Live awards show broadcasts have always been a staple in tentpole TV viewership, drawing in the who’s who from Hollywood and massive audiences to witness the world’s most prestigious honors from their living rooms. And while the ratings for awards shows have declined, the major awards shows don’t seem to be in danger of cancellation. They still outperform most networks’ non-sports lineups.

In a time of “great uncertainty”, industry organizers were left to creatively fill airtime, or come up with new, flexible ways to reach audiences.

Samba TV took a look at some of 2020’s big ticket awards shows to develop a clearer picture of their viewership performances to help advertisers understand what their audiences are watching and where to better optimize their media spend.

On August 30, MTV aired their 37th annual MTV Video Music Awards which was viewed by 4.1 million US households, representing a decline of 8% from the previous year. Hispanic and African-American HHs over-indexed significantly, as did 45-54-year-olds.

Similarly, just 4.7 million U.S. households tuned into the 55th Annual Academy of Country Music Awards, with a sharper decline of 20% from 2019’s broadcast. After postponing its original April broadcast date in Las Vegas due to the coronavirus pandemic, the California-rooted show came to Nashville for the first time, and was produced with social distancing measures in place. 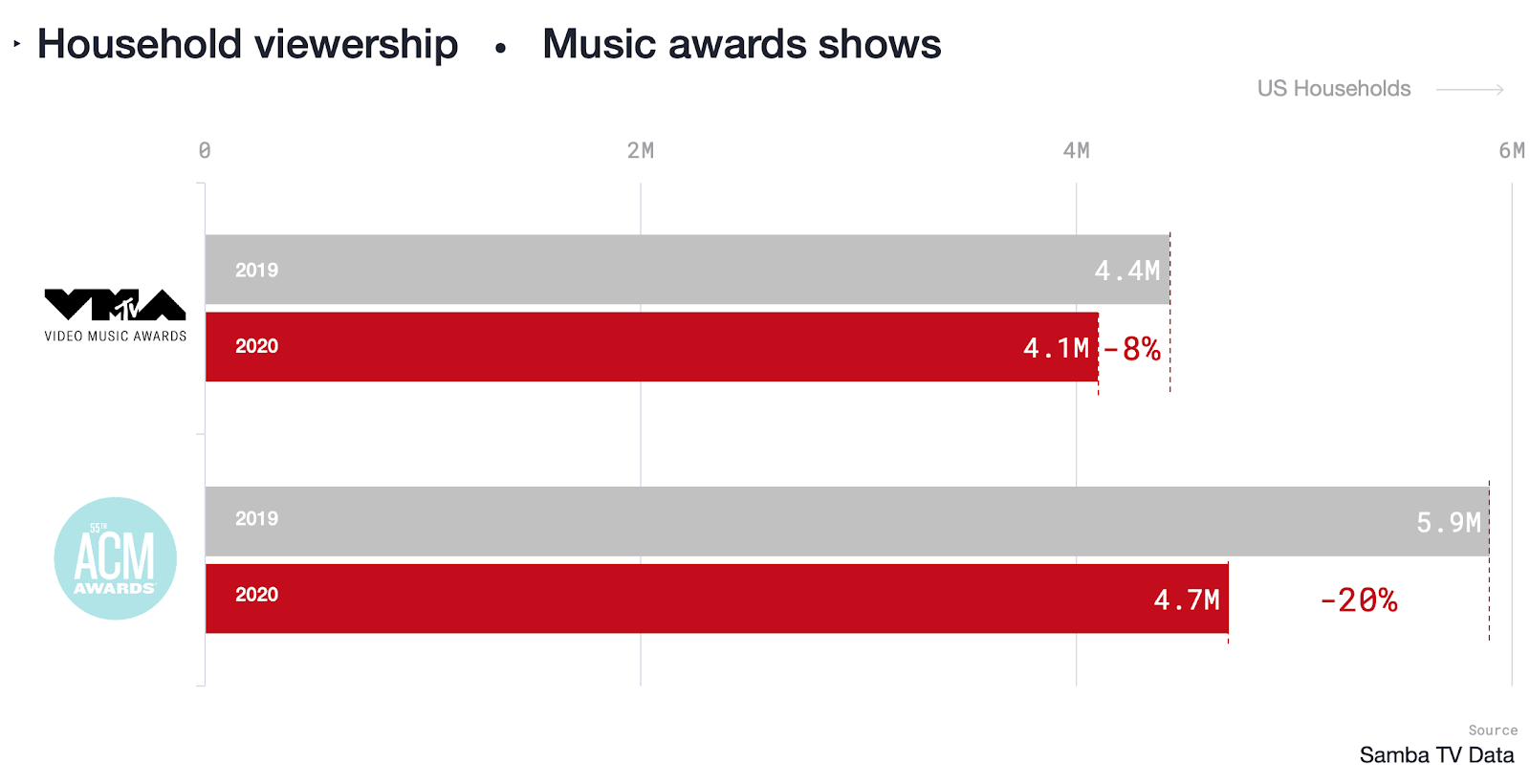 Meanwhile, the long-delayed 2020 iHeartRadio Music Awards, originally set to air on FOX in March, was reformatted to a two-day event in mid-September. The award show, which showcased music industry luminaries such as Billie Eilish and Lizzo, amassed a modest audience of just over half a million U.S. households each night.

Lastly, September’s 72nd Primetime Emmy Awards faced a fierce audience competition from both NFL football and the NBA Western Conference finals. According to Samba TV’s data, 4.7 million U.S. households viewed the broadcast, representing less than a 1% drop from the previous year. The decline may have been greater if not for huge tune-in numbers on the west coast. With audiences remaining largely indoors due to intense wildfires and the ongoing pandemic, there was active tune in up and down the coast.

Among the Top 25 DMAs across the country, San Francisco over-indexed the most compared to the U.S. overall at +66%. Samba TV’s analysis found that 7.3% of all households within the San Francisco DMA watched the Emmys. Meanwhile, the Sacramento DMA saw a 78% increase in viewership compared to 2019.

Interestingly, a second-by-second time snapshot of the 2020 Emmys viewership (below) shows a steady decline throughout the telecast. This should come as no surprise as the Emmys have received criticism over the years for becoming increasingly disconnected from the shows TV watchers are most into.

Our viewership data point to a decline that is likely to continue as the pandemic extends itself into 2021. In what is sure to be a unique fall TV season, Samba TV will continue to monitor trends in shifting audience viewing habits, leading with detailed analytics to help advertising partners make informed decisions in the weeks and months to come.